Spring is a wonderful time of renewal, especially after a long, cold winter. Renewal does not always occur gradually but often happens in spurts. For example, many trees accumulate energy in their branches and then use it to suddenly push out a plethora of new leaves. To my eyes, the presence of this energy is visible. The image discussed today was an attempt to make a photograph that communicated the tense energy that is present in bare tree branches immediately before new leaves emerge in early spring.

I drove on Highway 441 through the Great Smoky Mountains National Park one spring. The road climbs nearly 4,000 feet in elevation over a distance of fifteen miles between Gatlinburg and Newfound Gap and the elevation change provides a good opportunity to observe the progress of spring. Higher elevations show spring at an earlier stage whereas lower elevations show it at a later stage.

I began at low elevation where spring had already sprung and trees sported numerous young leaves. Driving higher took me to an area where leaves had not yet emerged from branches but the trees exhibited a crisp energy which seemed ready to produe a burst of new leaves from their bare branches. I looked for a composition that might visibly convey this feeling and today’s blog discusses that photograph.

My goal was to capture the feeling of tense energy just before leaves emerge from bare tree branches. Geometry is a compositional element that can contribute to visual tension and it was used in today’s photo by emphasizing a prominent tree branch which was oriented counter to the rest of the tree growth direction.

I normally look for opportunities to show the direction of a light source in photographs but I did not do that for today’s photograph. Instead, I respected the old KISS adage (keep it simple, stupid) for today’s photo so I could concentrate on geometry and simple tonal variations.

I found a promising scene which included a branch that was aligned horizontally and surrounded by trunks that were aligned vertically. A small stream was present in the foreground which provided a good anchor for the bottom of the image. The entire scene was located in full shade on the northeast side of a mountain.

Illumination from mid afternoon skylight with no direct sunlight on the scene produced low contrast. A few light meter readings indicated that contrast needed to be expanded substantially and I specified N+2 film development to increase contrast on the black & white film by two f-stops. The air was still so I was free to use any shutter speed and I selected a long shutter speed with a small f-stop to provide plenty of depth-of-field to ensure sharpness through the entire image.

I placed the tripod of my 4×5 camera on the shoulder of the road. After waiting a few minutes for a pause in traffic to be certain the air was still and trees were motionless, one sheet of Tri-X black & white film was exposed.

The digital image from the scanner looked sharp and contained tones from pure black to pure white. The population of bright pixels was small, however, and most were located at the bottom of the photo in the near foreground. This needed to be fixed during editing to shift visual attention to the trees rather than the foreground grass and rocks. Overall, the image lacked the feeling of crispness and tension I felt at the scene but was workable.

A Curve Adjustment Layer was opened in PhotoShop and its interface is shown below with tones that progress from light-to-dark beginning at the lower left corner. The gray-level histogram for the image is provided to show the distribution of pixel gray levels. 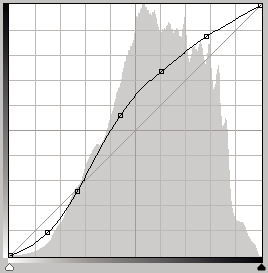 The curve adjustment helped separate tree trunks and the large horizontal branch from other image elements. This helped emphasize geometry in the image and imparted a stronger feeling of front-to-back depth in the fairly flat scene.

The overall result of the curve adjustment on the scanned image is shown below.

Next, local retouching was performed using PhotoShop’s Burn and Dodge tools. The original image layer (image from the scanner) was duplicated, named “Retouch” and placed directly above the original layer to contain retouching edits. Two major goals were identified for local retouching.

Second, attention was directed to the photo’s bottom edge. The bright grass and rocks were burned substantially darker to reduce the visual attention commanded by the photograph’s edge. Next, the small foreground creek was strengthened by brightening key areas of the creek. This was important because the horizontal alignment of the creek supports the horizontal tree branch in the middle of the photograph so geometry was strengthened even more. Comparing the previous image with the following image shows that foreground edits indeed helped keep eyes from falling off the bottom of the image, emphasized the horizontal tree branch and accentuated geometry.

Numerous minor edits were performed using PhotoShop’s Burn tool. A small bright spot from dust on the film was darkened. The spot can be seen in the previous image to the right of the largest tree trunk near the image top. The spot isn’t very distracting in the tiny image shown here but is quite distracting in large prints.

A short bright twig protruding from the right side of the largest tree trunk just below image center was darkened.

The burn tool also was applied to a short length of tree trunk which is aligned nearly parallel to the largest tree trunk and to its right at the top of the image. The short trunk distracted from the largest trunk and pulled eyes toward the top edge of the image. The effect of burning the short trunk darker can be seen best by comparing the previous image with the following image.

Finally, all four edges of the image were darkened slightly to help keep viewer’s eyes inside the photo.

The following image adds retouching edits to the previous image.

This image looks good when printed to nearly any size but feels best to me when printed larger since more scene details are visible in larger prints and detailed branch structure helps communicate emotion better.

One advantage of large format film is the ability to acquire an enormous amount of image detail inexpensively. My 4inch x 5inch black & white film produces a digital file size of nearly 1 GB when scanned (no color information and no PhotoShop layers are included). This large image size allows me to print today’s photograph as large as 43inch x 34inch with 600 pixels/inch using only original pixel data (i.e. no file up-sizing is needed).

Today’s photograph was an effort to capture the feeling of tense energy in trees immediately before leaf burst in early spring. Tension was developed visually in the composition through (a) geometry by emphasizing a prominent tree branch that was oriented counter to the general tree growth direction and (b) crisp, sharp image detail from a large image sensor. The image prints nicely at nearly any size but communicates the feeling of tense energy best in large prints. Comments you might have about the image, the photographic approach used for it, the composition or its workup will be appreciated. For a slightly better view of this photo, visit here.