I was visiting Death Valley National Park and planned a drive to Zabriskie Point to witness the sunrise. Many other people had the same idea because more than fifty people were waiting for the sun when I arrived. That’s easy to understand since Zabriskie Point offers terrific sunrise views and is easily accessible.

Shadows are the key to many landscape photographs for me and the diverse land forms at Zabriskie Point offered many shadows to incorporate in a composition. Clouds in the morning sky added even more shadows and a fairly heavy haze filled the valley to provide another element to the landscape.

The scene contained little color and was quite suitable for black & white photography. I particularly liked the contrast between the nearly white, sunlit dirt on the hillsides and the dark gravel at the bottom. I thought that those features should dominate the composition and the exposure.

First, I had to make a decision about filtration. A heavy haze obscured many of the mountain’s structural features on the other side of the valley to render large areas of the mountains without texture if the haze was not dealt with. A dark yellow filter cut enough of the haze to reveal structure in the mountains but also leave a suitable amount of haze to contribute to the mood of the landscape.

Next, I placed the dark yellow filter over the barrel of my spot meter and acquired a few light meter readings. The dark gravel at the bottom was placed on Zones III-IV (dark with good detail – slightly darker than middle gray) to keep tones of the gravel high enough to retain plenty of structural detail. I considered placing the gravel lower on the tonal scale (e.g. Zones II-III) but worried that inadequate detail would be produced in one of the most important areas of the image.

The nearly white, sunlit dirt on the hillsides fell on Zones VI-VII (slightly brighter than middle gray – bright with good detail). Those tones were good since they provided plenty of detail in another important image area. The brightest areas of haze across the valley fell on Zone VI (slightly brighter than middle gray) which was good. The brightest sky area in the upper right corner was on Zone VIII (bright with slight detail) which was brighter than I liked since it contained little detail. However, I accepted Zone VIII because the upper right corner was not important to the composition and would be rendered with just enough detail to allow darkening later during editing.

I mounted a 210 mm lens on my 4 inch x 5 inch view camera (150 mm is a “normal” focal length for 4×5 cameras), composed an image, attached the dark yellow filter and watched shadows move across the scene as the sun rose. I acquired one photograph and watched movement of the big shadow on the large hump of bright dirt in the middle of the composition. When that shadow seemed to provide the maximum amount of visual tension, I exposed one more photograph. Both images were acquired using Tri-X black & white film exposed at 1/4 sec and f/45 and both negatives were developed normally.

The best film was the one with tension maximized for the shadow on the large hump of bright dirt in the middle of the composition. I instructed my scanner to acquire a high resolution digital file at my usual resolution of 5,000 ppi and 16-bit pixel depth. The digital image obtained from the scanner without editing is shown below. 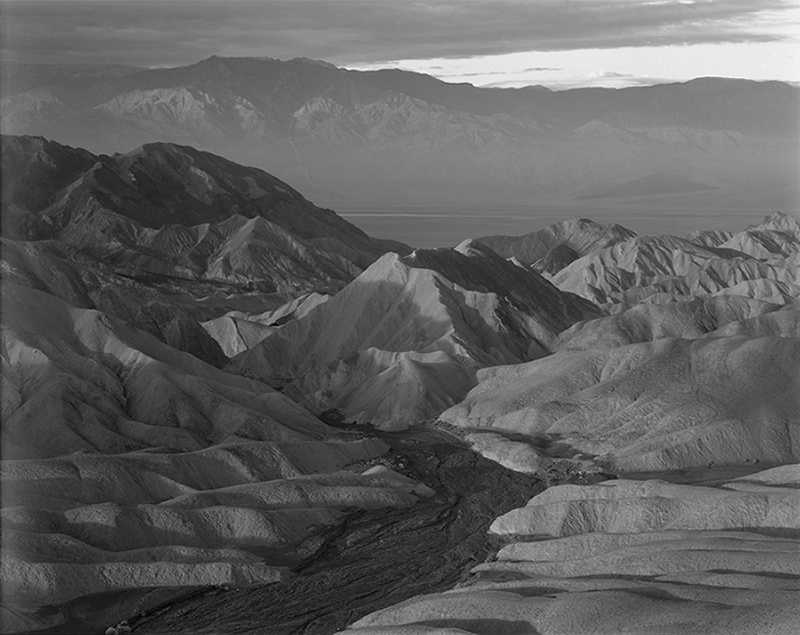 The gray level histogram for the scanned image is shown below (tones progress from dark-to-light beginning at the lower left corner). Although the scanned image looked flat, its histogram showed that pixel tones ranged from completely black (0) to completely white (255) and included all gray tones in between. I’d have to say that the exposure was technically adequate but the mood of the scene was nearly absent from the scanned image.

Editing work was needed to redistribute the image’s pixel tones to express the mood at the scene. Most importantly, the bright sky in the upper right corner distracted viewer’s attention and editing was needed to redirect visual attention to the nearly white, sunlit dirt on the hillsides and the dark gravel at the bottom. Saying this another way, the strongest presence of sunlight in the scanned image was the bright sky at the upper right corner but the strongest presence of sunlight in the photograph needed to be on the diverse land forms and shadows toward the photograph’s center.

PhotoShop’s Magnetic Lasso tool was used to select the brightest areas of sky in the upper right corner and then a Brightness/Contrast adjustment layer was opened for the selection. Brightness was decreased moderately by moving the Brightness slider from 0 to -18 but the Contrast slider was kept at 0 without moving. Comparing the previous and following image shows that this edit darkened the brightest sky areas moderately.

Next, PhotoShop’s Magnetic Lasso tool was used to select the valley floor and the mountains across the valley. A Brightness/Contrast adjustment layer was opened for the selection and brightness and contrast were both increased by moving the Brightness slider from 0 to 10 and the Contrast slider from 0 to 80.

Comparing the previous and following image shows that this edit produced more visible structure in the mountains where haze had nearly obscured the mountain’s features in the scanned image. Land forms on the valley floor also were strengthened and the presence of sunlight on the mountains and valley floor was increased.

The following image includes Brightness/Contrast adjustments for the bright sky, the valley floor and mountains across the valley.

The darkest and brightest pixels of the image were left unchanged but midtone pixels were brightened considerably by bending their section of the linear curve downward. 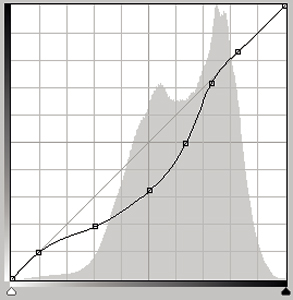 The affect of global curve adjustment on the image is shown below.

Curve adjustment emphasized a film defect that was less visible in the scanned image. The defect is observed as a considerably brighter region near the film’s left edge as well as a somewhat brighter region near its right edge. As is the case for many people, I develop my negatives in trays using hand agitation that is performed by shuffling the stack of film. If one end of a film extends beyond other films in the stack, more developer flows over that end so it becomes overdeveloped. Increased development creates darker areas on the negative and those areas are brighter after scanning (or darkroom printing). For some reason, I was careless while developing this group of films so I’d give my development a grade of “F” because of nonuniform film agitation.

Looking beyond the film defects, we can say that the curve adjustment improved viewer eye movement over the photograph. The difference between the brightest sky areas and other image regions such as the sunlit dirt on the hillsides was reduced by brightening most other tones but not brightening the sky areas. This greatly reduced the visual dominance of the upper right corner of the scanned image and allowed visual attention to be directed more toward the sunlit dirt on the hillsides and the dark gravel at the bottom. It was important to shift the presence of sunlight to areas where it was needed most in this photograph.

Local retouching was performed using PhotoShop’s Burn and Dodge tools. The original image layer (image from the scanner) was duplicated, named “Retouch” and placed directly above the original layer.

Attention was directed first to the defects that resulted from poor film agitation during development. PhotoShop’s Burn tool was used to darken the light areas on the left and right edges of the image.

Next, the brightest sky areas were burned darker to bring out cloud structures within those areas. This further reduced the presence of sunlight at the upper right corner so sunlight could be felt more strongly in other areas of the photograph.

The foothills across the valley were emphasized next. The only easily visible foothill in the previous image was located near the right edge of the valley. PhotoShop’s Burn tool was used to darken other foothills near it to increase the visibility of the whole group. In addition, a single foothill was darkened to the left of image center where it emerges from behind the hills on the near side of the valley. These edits can be see by comparing the previous and following images.

Finally, numerous small areas illuminated by direct sunlight were brightened using PhotoShop’s Dodge tool to increase the presence of sunlight where it was most needed.

The following image contains all of the previous edits.

It was time to evaluate a test print so I made a 16 inch x 20 inch digital inkjet print and set it aside for a couple of days while my mind cleared. When I finally took a look at the print, I thought that its tones looked a bit too weak. In particular, the feeling of blazing sunlight that is usually experienced in Death Valley was not as strong as it could be. 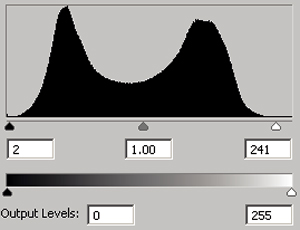 Another test print was made and I was happy with it. The final image is shown below.

This photograph prints very nicely at a large size. Large prints clearly show the texture of the scene and communicate the feeling of Death Valley that I experience there.

The subject of this photograph was a sunrise view of Death Valley from Zabriskie Point. Any comments you might have about the image, the photographic approach used for it, its composition, or image workup will be appreciated. For a larger view of this photograph, visit here.