I photographed the beautiful Flint Hills in Kansas last year and previously discussed three of those photos here, here and here. One of my stops was the Konza Prairie Biological Station near Manhattan in northeastern Kansas. The 8,600 acre Konza tallgrass prairie has served as a valuable outdoor laboratory where prairie ecosystems have been studied for four decades.

Fire has always been an important component of prairie ecosystems and continues to influence the prairie today. The timing of my visit to Konza was good because spring burning was being conducted and areas recently blackened by fire were excellent subjects for my black and white photography. The subject of today’s blog was a recently burned tract of land that literally looked black and white. To my eyes, the natural beauty of the prairie is evident in this photograph.

The Flint Hills in Kansas commonly display flat tops. This flatness seems to encourage people to describe the region as “flat” rather than “hilly.” After tall grass (more than 6 feet tall) and brush are removed by burning it is easier to see the slopes of the hills along with their flat tops. Burning reveals other structural features of the Flint Hills such as rocks and bare stalks of brush and makes it easier to appreciate the vast size of the prairie. I thought the scene of today’s photograph was extremely beautiful and experienced one of those “ooooh” moments.

A 210 mm lens for my 4inch x 5inch camera covered the scene area appropriately. A medium yellow filter was added to moderately enhance the structure within clouds.

I aimed a 1 degree spot meter through the yellow filter and acquired two light meter readings. The darkest tones of the burnt areas were placed on Zones II-III (dark with little detail – dark with good detail) and the brightest tones of the sky fell on Zone VII (bright with good detail). Since these tones were reasonable, normal (N) development was specified for the black & white film.

It was important for rocks, plants and other details throughout the scene to have good sharpness in the image and I was glad to have a view camera to help accomplish that. The lens of my camera was tilted moderately forward so the slice of sharp focus provided by the lens was positioned more effectively within the scene. That is, the plane of sharp focus was tilted to include the foreground close to the camera (the bottom of the image) as well as the hill tops far from the camera (on the horizon). This provided adequate depth-of-field through the whole scene without requiring an extremely small f-stop so objects throughout the scene were rendered sharp on the film.

My light meter offered several shutter speed and f-stop combinations and I chose a shutter speed of 1/8 sec and an f-stop of f/32. I was confident that a sharp film was obtained as a result of lens tilt and f-stop choices.

I normally make only one exposure for each scene unless movement from wind or water introduces uncertainty during image capture. However, two sheets of TMax-100 black and white film were exposed for today’s scene because I was excited and wanted to have a spare negative for insurance.

Both 4inch x 5inch black & white films were identical so I randomly selected one to scan at my usual resolution of 5,000 ppi and 16-bit pixel depth. The cropped image from the scanner had dimensions of 23,748pixels x 16,428pixels and its file size was 744MB. That resolution was maintained throughout image editing and is reduced only during printing when small prints are produced.

Of course, an unreasonably long time is required to download such large images from the web so images were severely downsized for display here. The images shown in this blog have dimensions of 600pixels x 417pixels and a file size of 244kB (before JPEG compression). Such tiny images retain few details of the original scanned image and contain many artifacts from extreme downsizing.

For example, consider sharpening artifacts which were unintentionally introduced during downsizing. I don’t perform image sharpening during acquisition, seldom perform it during editing and usually only sharpen modestly during printing. Consequently, the images shown here were not sharpened prior to downsizing for web display.

Even though sharpening was avoided as much as possible during image downsizing, edge-sharpening artifacts are clearly evident along the horizon, especially on the left side of the image. Preparing high-resolution images for web display produces unfortunate changes to images that degrade the original photograph substantially. Again, we learn that viewing images on the web has its limitations and we all should make an effort to visit museums and galleries to see the real thing.

The image below is the 244kB version of the image which was obtained from the scanner.

The gray-level histogram for the scanned image is shown below with dark-to-light tones displayed from left-to-right. The histogram shows that pixels span the entire range of possible gray levels from pure black to pure white. However, the populations of pure black/nearly black and pure white/nearly white pixels were quite small so the image looked flat. 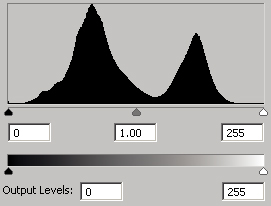 A Curve Adjustment Layer was opened to adjust the tonal content of the image. PhotoShop’s curve adjustment user interface is shown below with light-to-dark tones displayed from left-to-right.

First, the black and white endpoint sliders were moved to increase the populations of pure black and pure white pixels. Next, the curve at the bright end of the histogram was angled downward to lighten the bright image content (bright rocks, bright dirt and bright clouds) and the brightest pixels were lightened the most. Finally, the curve for the dark half of the histogram was bent upward to deepen darker pixels of the image (especially dark areas surrounding bright rocks and bright dirt) and the darkest pixels were deepened the most.

The result of curve adjustment is shown in the following image. The combination of lightening bright pixels and deepening dark pixels increased the texture of the scene and strengthened the photograph’s mood. 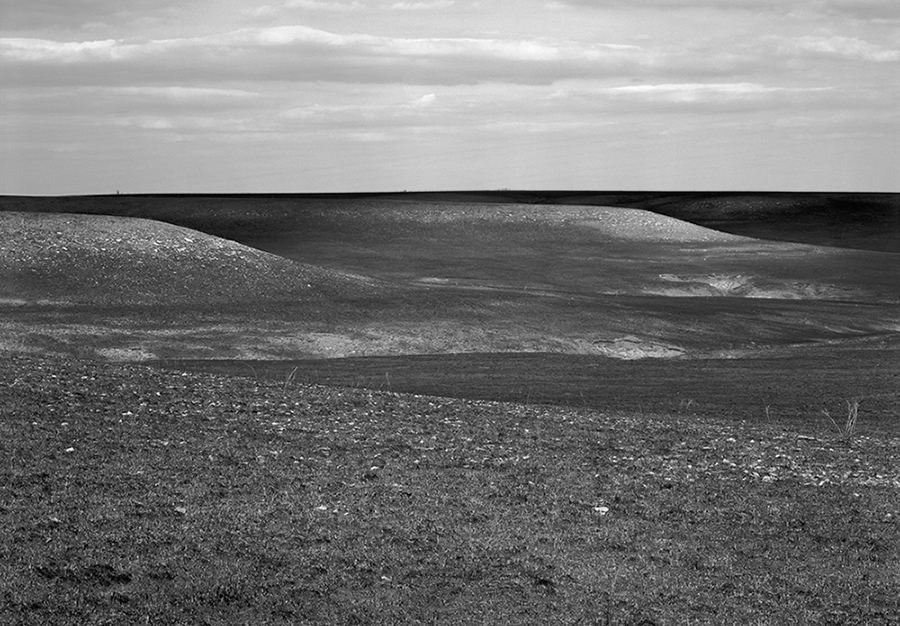 Next, attention was directed to a long triangular section of earth which enters the right side near the middle of the photograph and spans nearly the entire width of the photo. The goal of editing was to increase the presence of this area and, in turn, emphasize the left-to-right downward slopes of the hills. In concrete editing terms, the goal was to increase the contrast among pixels in the triangle.

Contrast was increased by moving the black and white endpoint sliders greatly to steepen the curve. The following image shows how the local curve adjustment increased contrast within the triangular area. In addition, lines between the triangle and surrounding areas were strengthened and that helped draw visual attention to the downward slopes of the hills.

First, brush stalks located on top of the broad, sloping foreground hill were brightened using the Dodge tool. To accomplish that, the image was enlarged greatly on the computer monitor and each stalk was brightened individually. The effect of brightening these stalks can be seen by comparing the previous and following images.

Next, tonal variations were reduced for small selected areas near the bottom and right edges of the image by darkening bright areas and lightening dark areas. One goal of this was to help keep viewer’s eyes from falling off of the image. Another goal was to draw more attention to the large, dark clump of grass in the lower left corner to emphasize front-to-back depth. Comparing the previous and following images shows that editing helped accomplish both of these goals.

Third, areas of light dirt were brightened with PhotoShop’s Dodge tool. Comparing the previous and following images shows that brightening light dirt increased the texture and visual interest of the scene’s terrain.

Finally, tonal variations were reduced in the sky by darkening some bright areas and lightening some dark areas. The goal of this was to emphasize the largest cloud which spans nearly the full width of the image. The effect of this edit can be seen by comparing the previous and following images.

The image below shows the result of all local retouching. Retouching actions can be seen best by comparing the retouched image to the previous image.

A 16inch x 20inch test print was made and the print looked good. However, I thought its mood could be strengthened so a Levels Adjustment Layer was opened so I could evaluate mood by moving the sliders various amounts while the image was viewed on the computer monitor. The Levels Adjustment user interface for the previous image is provided below with dark-to-light tones of the histogram displayed from left-to-right.

The strongest mood was achieved by increasing the population of pure white pixels by moving the white endpoint slider from 255 to 239 as shown above. This adjustment added energy to many bright areas and helped separate the sky from the terrain below it. The image below shows the result of Levels adjustment. 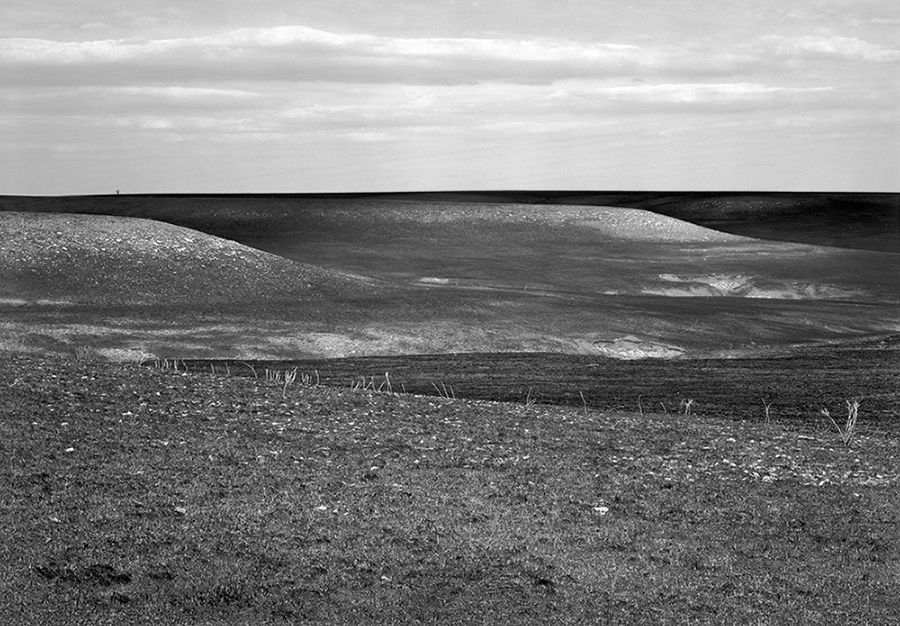 The photograph discussed today shows a view of the Flint Hills which emphasizes the vast size of the prairie, the slopes of the hills, their flat tops and other structural features such as rocks and bare stalks of brush. Photographing the scene immediately after spring burning helped reveal these structural features. I hope this photograph communicates the beauty of the Flint Hills to others. For a slightly better view of this photo, visit here. To see other photographs of the Kansas prairie, visit the Kansas Gallery on my website.