This photograph was taken quite a few years ago but I clearly remember the light at the scene. My tripod was placed against a vertical wall on one side of a canyon and the camera pointed toward the other nearly vertical wall of the canyon. The sky was clear and the camera faced the general direction of the bright sun. The light had a wonderful quality of brilliance. 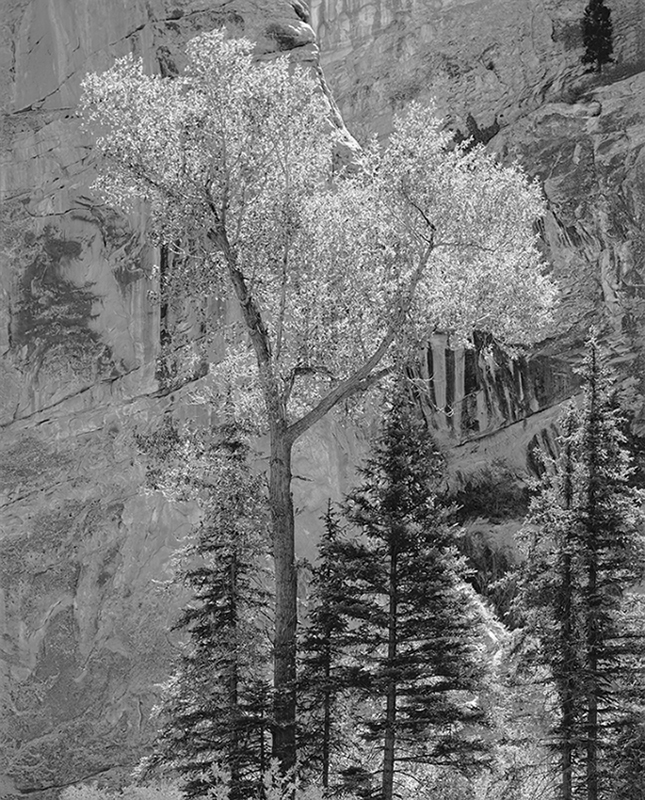 Landscape photographers often deal with high contrast at scenes when their camera faces the sun. Black and white film offers many advantages in these situations because tried-and-true techniques can be used to reduce high contrast. Techniques include film choice, the use of colored contrast filters, varying film development time, varying controls during film scanning and, of course, digital editing using PhotoShop or other software. These techniques have been discussed in previous blog articles on this website and a few examples can be found here, here and here.

I have photographed many landscape scenes that included trees which were backlit by bright sun and it was almost always necessary to reduce contrast to retain image details in areas directly illuminated by the bright sunlight as well as shadowed tree trunks. When I first saw today’s scene I thought it would require a similar technical approach. After looking at the scene, however, it became clear that it was unusual.

I pulled out my light meter to measure the scene’s contrast to be certain that the physical reality agreed with my eyes. Indeed, the contrast was substantially less than is usually encountered in backlit scenes such as this and I thought, “I’ve got to record this.”

I set up my 4inch x 5inch camera and composed a photograph which contained very bright tones from sunlit Cottonwood leaves, sunlit rocks and sunlit pine needles as well as very dark tones from shaded areas of the pine trees. The shaded canyon wall behind the trees provided a large background of middle gray tones.

I was impressed by the lack of strong contrast at the scene even though I faced the sun. Amazed at the power of “fill” light in such a large scene, I wrote normal (N) development on the film’s exposure record.

Inspection of both films showed little difference so I selected the film that was exposed with a smaller f-stop. A high resolution digital file was obtained by drum scanning the film at my usual resolution of 5,000 ppi and 16-bit pixel depth. The digital image obtained from the scanner without editing is shown below. 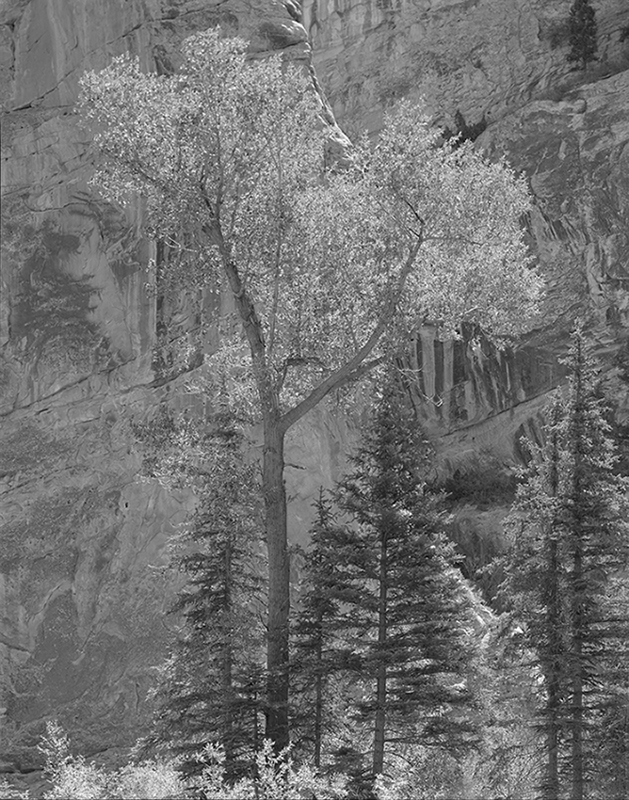 I liked the composition but the image lacked the feeling of brilliance that I felt at the scene. Consequently, the primary goal of image editing was to strengthen image brilliance. The histogram of the digital image file from the scanner is shown below with dark-to-light tones displayed from left-to-right. 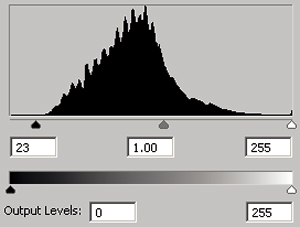 The histogram shows that the scanned image contained the full range of gray tones (0-255 in 8-bit terms) although the vast majority of image pixels were distributed in one broad peak that spanned the middle three quarters of the histogram. The brightest pixels occupied a small peak at 255 along with an extremely small number of pixels near 255. The darkest pixels were found only in an extremely weak, nearly flat peak that was barely visible in the histogram without enlargement.

This was a difficult problem and my plan to deal with it involved two approaches. First, the bottom of the image would be cropped to eliminate as much brush as I could. Next, some branches of brush would be edited out of the image and the remaining brush would be burned darker than the Cottonwood leaves. Cropping was executed immediately but the removal and darkening of the remaining brush was delayed until later when image tones were closer to their final values.

The image below shows the effects of both cropping and Levels adjustment. Comparing this image to the previous image shows that cropping reduced the amount of brush and the Levels adjustment increased the number of very dark pixels. 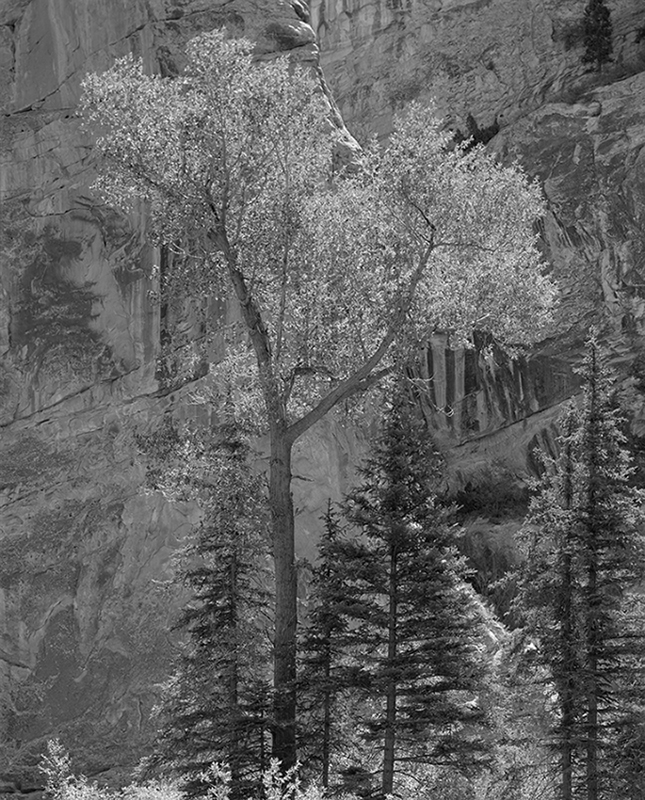 Next, a Curve Adjustment layer was opened to increase the number of very bright pixels and modify most other image areas as well. The user interface of PhotoShop’s Curve adjustment tool is shown below with dark-to-light tones displayed from right-to-left (the previous histogram displayed dark-to-light tones from left-to-right). 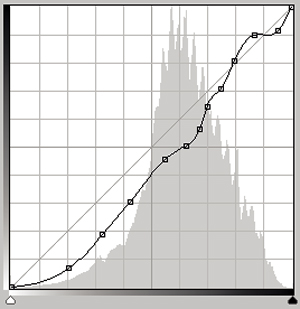 The numbers of pure white and pure black pixels were kept the same (by not moving the white and black sliders) but most other tones in the image were changed.

The brightest pixels (except pure white) were brightened significantly by bending the curve downward at the lower left corner. This brightened the sunlit Cottonwood leaves and accomplished it more gently than if an abrupt adjustment had been made with the Levels tool.

Most other areas of the curve also were modified but the extent of adjustment became less as pixel tones became darker. This can be seen as smaller deviations from the initial straight line as tones become darker.

The canyon wall looked too heavy in the previous image so it was brightened a bit more than other tones. This can be seen near the histogram peak where the curve was bent further downward than in nearby curve areas. In addition, pixels corresponding to dark stripes in the wall were darkened more by bending their curve area upward.

The image after curve adjustment is shown below. 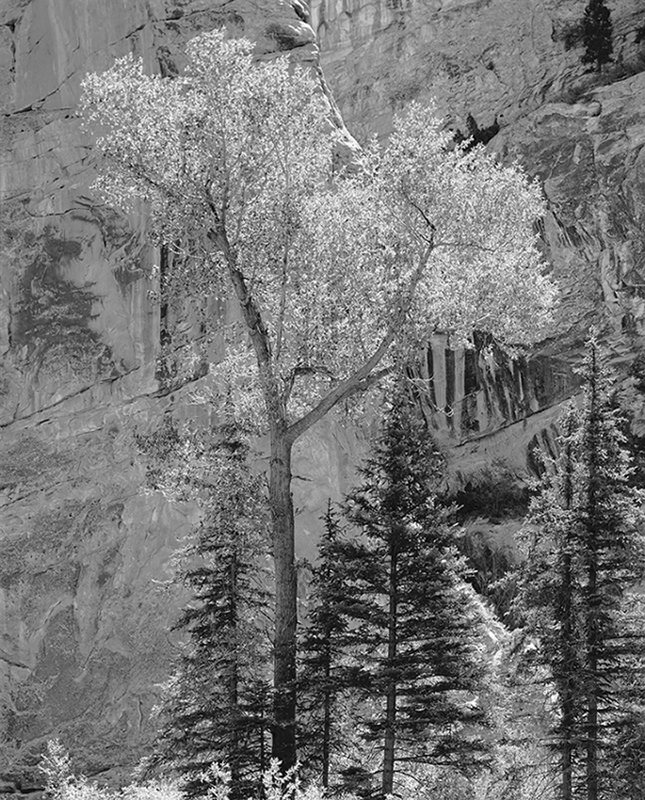 Finally, retouching was performed. This image required an awful lot more retouching than most of my photographs.

First, the small tree near the upper right corner was separated better from its surroundings. Tones of the dark tree merged with dark tones to the left of the tree so PhotoShop’s Dodging tool was used to lighten some of the dark tones adjacent to the tree. Comparing the previous and following images shows increased separation although the tiny web images here barely show the edit.

Next, a group of brush plants were separated from one another. The brush is located between the two tallest Pine trees a short distance below the image centerline. The brush originally looked like a nearly featureless dark blob so PhotoShop’s Dodging tool was used to lighten some brush areas to help distinguish individual plants. The following image shows increased separation although separation is considerably more visible in larger images.

Three areas within the dark Pines commanded too much attention because they were overly bright. Those areas were burned slightly darker with PhotoShop’s Burn tool to reduce their visual attention. The most prominent of these was a very bright area on the rock slope behind the middle Pine. That area along with other bright areas within the dark Pines can be seen by comparing the previous and following images.

Most image tones were now close to their final values so it was time to edit the bright foreground brush as previously planned but delayed. Recall that the image bottom was cropped to reduce the amount of bright brush but the remaining brush still commanded too much visual attention so two steps were planned to rectify the problem.

I occasionally remove a branch or two from photographs but this photo required an awful lot of editing work that I would rather not have done. Since such drastic editing was required for today’s photo, I gave myself a grade of “D” for acquisition.

Spending so much time “fixing” the foreground brush reminded me of the rule, “Get the image as right as possible as soon as possible.” That is, I should have worked harder while capturing today’s image to reduce or eliminate foreground brush so I wouldn’t have to spend so much time sitting at a computer with PhotoShop. For example, I could have pushed the brush down temporarily during image acquisition by laying heavy tree branches on the brush.

Comparing the previous and following images shows that the two steps effectively reduced the visual attention of the foreground brush. Editing the brush helped keep attention on the Cottonwood tree and greatly reduced the tendency of viewer’s eyes to fall off the bottom of the image.

Finally, numerous small objects near the edges of the image were either brightened or darkened with PhotoShop’s Dodge or Burn tools to help keep the eye from falling off the image edges. For example, the topmost sunlit rock at the upper edge of the the image near its center was darkened slightly and small dark rock areas near the top left corner were brightened slightly.

The final image with all edits is shown below.

Many of the edits discussed above are barely visible in the small web images shown here but are prominent when larger resolution images are viewed.

I previously mentioned that Ansel explained that very bright and very dark areas against a middle gray background often impart an impression of brilliance to photographs. Although light at the scene of today’s photo looked brilliant, the image from the scanner lacked that feeling. The histogram of the scanned image revealed the presence of only minuscule numbers of pixels at the bright or dark ends of the histogram with the vast majority of image pixels being distributed in a single broad peak that occupied the middle three quarters of the histogram.

In an attempt to follow Ansel’s lead, my editing goal was to strengthen the feeling of brilliance with a three pronged approach – increase the number of very bright pixels, increase the number of very dark pixels and narrow the broad peak of mid-toned pixels. Editing success was evaluated by comparing the initial image from the scanner with the image after editing was completed. 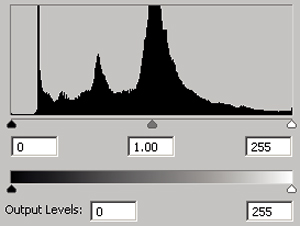 The subject of this photograph was brilliant light in a narrow canyon and I believe the final image exhibits some of the brilliance which I saw at the scene. Any comments you might have about the image, the photographic approach used for it, its composition, or image workup will be appreciated. For a larger view of this photograph, visit here.