In an April 2013 blog, I discussed a photograph that was acquired from the bank of Lake Louise. The subject of the image was the lake itself, a popular destination for visitors to Banff National Park in Alberta, Canada. Lake Louise is located near the town of Banff and is easily accessible by paved roads.

Lake Louise Hotel sits at the edge of the lake and the hotel was the subject of the photograph discussed in today’s blog. Actually, I wanted to photograph the hotel in the context of the spectacular scenery that surrounds it. In contrast to my previous photograph of the lake, the location for today’s photo was less accessible. 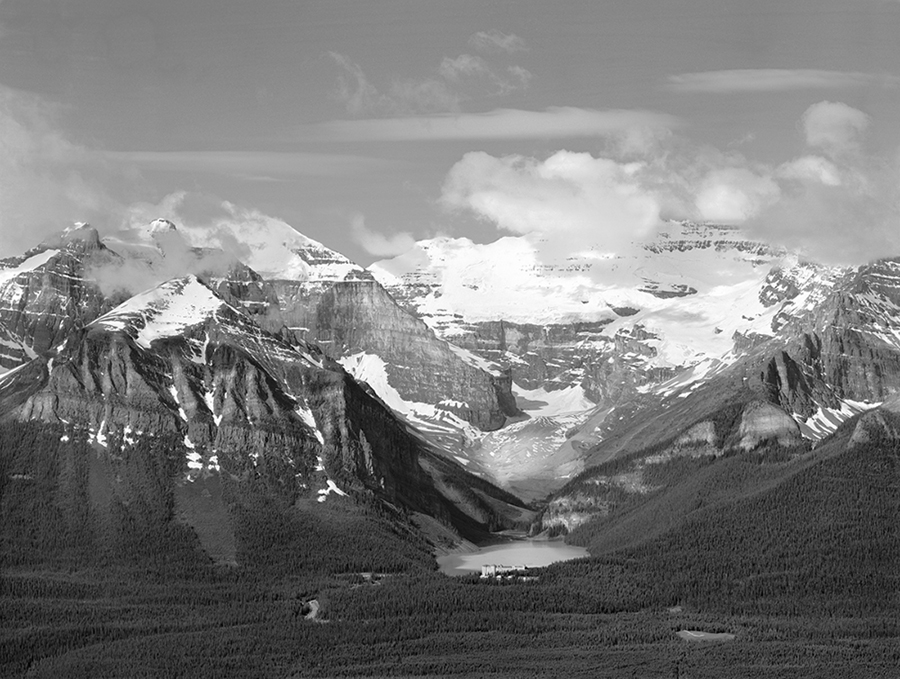 A photograph which shows the hotel and the mountains surrounding it required a camera location that was quite far from the hotel. A mountain across the valley allowed me to compose an image which included the hotel, lake, Victoria Glacier at the far end of the lake and the huge mountains. The scene literally took my breath away.

The intended output of a photograph is an important consideration when photographing a scene. In the case of today’s photo, placing the camera on a mountain very far from the hotel meant that it would be best to view the photograph as a large print to magnify the hotel enough to see it adequately. Consequently, a high resolution image was needed to produce adequate detail in the small portion of the image that contained the hotel. I was glad to be shooting a 4inch x 5inch camera.

Placing the camera very far from the hotel also meant that quite a bit of atmospheric haze was present in the air. Reducing haze usually helps mountains feel more solid and I definitely wanted the mountains in this photograph to feel strong and solid. I selected a dark yellow filter to significantly reduce the effects of atmospheric haze on black & white film.

The dark yellow filter was placed over the lens of my 1 degree spot meter to acquire light readings through the filter. Sunlit trees on the valley floor were placed on Zone IV (slightly darker than middle gray) and the brightest areas of sunlit snow fell on Zone VIII (very bright with little detail). Those tones were appropriate for the image I had in mind so I specified normal (N) development for the film.

I mounted my longest lens on the 4inch x 5inch camera. It was a moderately long 305mm focal length lens (the focal length of a “normal” lens for a 4inch x 5inch camera is 150mm). Fortunately, the lens created a composition that was just about perfect for the scene. I placed the dark yellow filter on the camera lens and exposed one sheet of Tri-X black & white film at 1/30 sec and f/32.

A Levels Adjustment Layer was opened in PhotoShop and its user interface is shown below. Dark-to-light tones of the histogram are displayed from left-to-right. 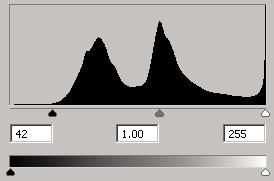 The goal of Levels adjustment was to help increase the feeling of sunlight in the image. To accomplish that, the white slider was kept at 255 to preserve luminosity in bright sunlit areas and the black slider was moved from 0 to 42 to deepen dark areas of the image. Deepening dark tones may appear to be antithetical to the goal of strengthening the presence of sunlight but bright tones seem brighter when viewed next to darker tones.

The influence of Levels adjustment on the image is shown below. The adjustment was a step in the direction of strengthening the feeling of sunlight in the image. 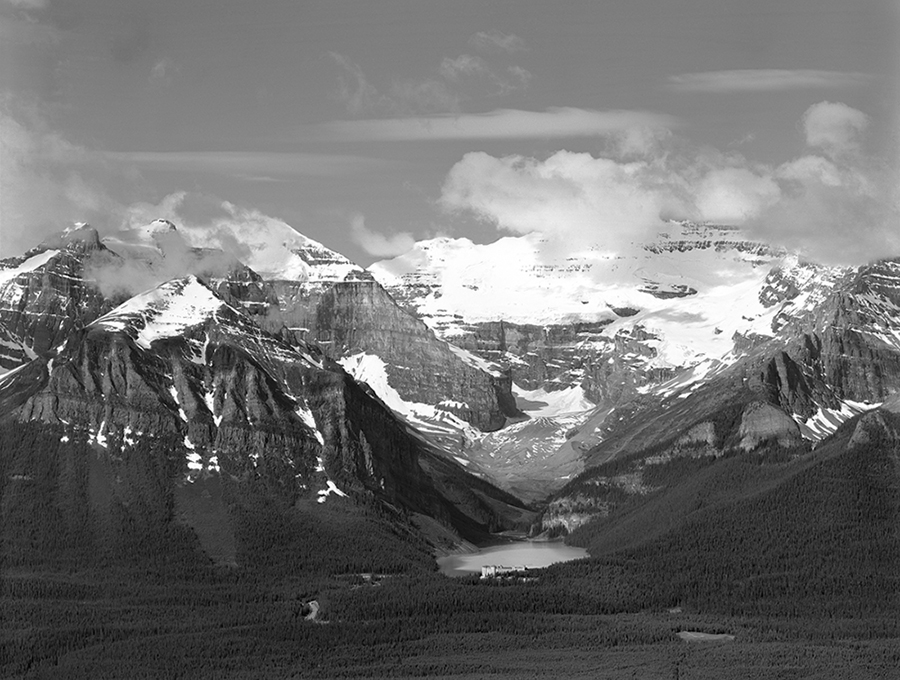 Next, a Curve Adjustment Layer was opened and its interface is shown below. Note that tones progress from light-to-dark beginning at the lower left corner. The same three gray tone groups remain present in the histogram but a full range of gray tones (0-255) now exists in the image after the Levels Adjustment.

The linear curve was (a) bent upward in the lower left of the histogram to slightly darken bright tones (except pure white) in sunlit snow and (b) bent downward in most of the remainder of histogram (except the darkest grays & pure black) to brighten most other image tones. 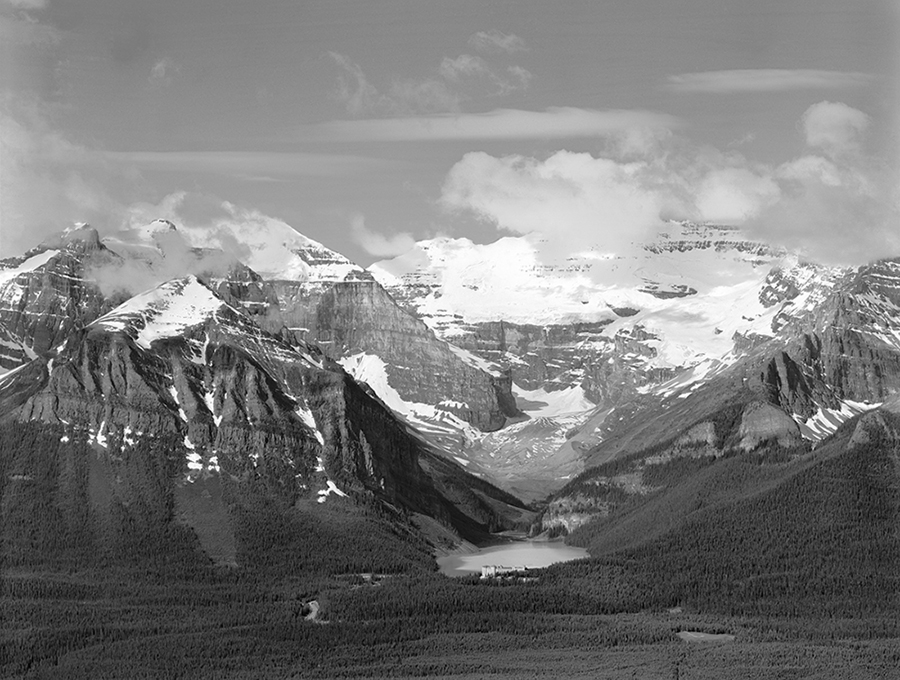 Next, local retouching was performed using PhotoShop’s Burn and Dodge tools. The original image layer (image from the scanner) was duplicated, named “Retouch” and placed directly above the original layer to contain retouching edits.

Attention was directed to the sky first. The sky was weak along both sides of the image but especially on the left side. The weak sides commanded viewer attention where it was not wanted. Brighter areas of sky on both sides were darkened slightly with PhotoShop’s Burn tool. This helped keep viewer’s eyes directed toward the center of the image.

Sections of a few clouds above the sunlit snow were brightened using PhotoShop’s Dodge tool. This helped move viewer’s eyes up the mountain toward the bright sunlit snow and the image center.

The glacier above the lake was brightened to add more visual weight to the center of the image.

Finally, attention was directed to trees in the valley. The non-flat terrain of the valley included long, low ridges with darker trees. The ridges were emphasized by darkening them slightly using PhotoShop’s Burn tool. Darker ridges produced more visual interest which helped the valley compete better with the spectacular mountains and sky. Gray level variations among large areas of the valley also were reduced, especially near the bottom edge of the right half of the image.

Larger prints look more impressive than smaller prints. One reason for this is that larger prints do more justice to the impressively sized mountains in the image. Another reason relates to my goal for the photograph. The overall goal was to show the Lake Louise Hotel in the context of the spectacular scenery that surrounds it. This goal is best achieved when the image is printed large to reveal detailed structure of the hotel.

I cropped a hotel area which measured 1,641pixel x 656pixel from the nearly 1 GB full-resolution image. It was then downsized to 600pixel x 240pixel for display below. The crop shows that the full resolution image contains plenty of detail which is visible when the image is printed large.

A similar area measuring 63pixel x 28pixel was cropped from the 200 KB web image shown at the top of this blog. The area was then upsized to 600pixel x 267pixel for display below.

Comparing the two cropped images illustrates the difference one might expect to see when viewing a large print produced from the full-resolution image as opposed to a typical low-resolution web image. The emotional content of the two images also is substantially different.

Most photographers gain much inspiration and knowledge by viewing low-resolution images on the world wide web. I certainly do. As valuable as web viewing is, however, we must remind ourselves to take time to view original photographic prints in galleries, museums and studios. Original art exhibits considerably more emotional power than web images and that is what matters most for me.

Today’s photograph shows the splendid Lake Louise Hotel within the spectacular scenery that surrounds it. The image communicates much of the emotion that I felt at the scene so I consider it to be a successful photograph. Comments you might have about the image, the photographic approach used for it, the composition or its workup will be appreciated. For a slightly better view of this photo, visit here.