I arrived in Manhattan, Kansas, fresh out of Ph.D. school to become a professor at Kansas State University. I was impressed with the Flint Hills of northeastern Kansas but didn’t obtain many photographs of it because I was busy teaching new courses, initiating a research program, earning tenure and fixing an old house that I purchased.

I thoroughly enjoyed living in Kansas but departed after 8.5 years for a job at the University of Tennessee. A few months ago, I had an opportunity to photograph the Flint Hills, 27 years after leaving Kansas. The overall goal of that trip was to capture some of the natural beauty I knew was there. One of my main stops was the Konza Prairie Biological Station near Manhattan.

The Konza Prairie is an 8,600 acre tract of tallgrass prairie which is owned by The Nature Conservancy and Kansas State University. Konza is operated as both a preserve and a research field station for prairie ecosystems. Fire has always played an important role in prairie ecosystems and has been studied at Konza for four decades.

Since I photograph in black and white, I thought that areas recently blackened by fire would be excellent subjects for my photography. The timing of my trip was good because Spring burning was being conducted during my visit. Several photographs which show burning or recently burned areas of the prairie are posted on my website here.

The photograph below will be discussed in today’s blog. It shows a stand of oak trees in an area of the Konza Prairie that had been burned recently.

I had been looking for specific oak trees to photograph and this grove attracted me because of its many fine specimens and, in particular, the nearest tree with a large branch that reached to the ground. I also liked the bare stalks of brush and exposed dirt in the foreground which remained after burning.

The primary subject of my composition was the nearest oak tree and the branch which extends to the ground. Evidence of sunlight and shadows was important for this photo so I moved close enough to the tree to place large shadowed branches adjacent to a large sunlit area of the tree trunk. I thought the proximity of these two contrasting areas would help emphasize both sunlight and shadows.

I positioned the camera so some of the tree’s upper branches extended towards the camera to create both front-to-back and top-to-bottom depth in the photograph. The camera was placed so the end of the branch which extends to the ground was located squarely in the lower right corner of the image and in front of some deliciously curvy trees.

A 210 mm lens for my 4inch x 5inch camera covered the area appropriately. I took two light meter readings with a 1 degree spot meter. Dark tones of the large shadowed branches on the photo’s left were placed on Zone III (dark with good detail) and bright tones of the sky fell on Zone VIII (very bright with little detail). Since I wanted the sky to be rendered Zone VII (bright with good detail), N-1 development was specified for the film to contract the bright tones one f-stop.

You may ask, “Why should the bright sky be placed on Zone VII rather than the brighter Zone VIII?” The answer is that the primary subject of this photo was the nearest tree so I wanted the strongest evidence of sunlight to be associated with it rather than the sky. Putting the sky on Zone VII allowed sunlit areas of the tree to be brighter than the sky, say Zone VIII, to develop a sense of sunlight where it was most needed. This may not be appreciated when viewing the tiny web image shown here but is important in higher resolution images that reveal greater detail.

My light meter offered several shutter speed and f-stop combinations. The scene was too complicated to use my view camera’s swings and tilts to improve depth-of-field so it was necessary to obtain adequate depth-of-field using only a small f-stop. Unfortunately, the wind was blowing strongly and a moderately fast shutter speed was needed to prevent blur. I would have preferred to use a smaller f-stop (and thus a longer shutter speed) to ensure that sharp focus was obtained through the whole scene but I compromised by selecting an f-stop of f/16 and a shutter speed of 1/30 sec.

I waited about ten minutes for the wind to moderate a bit and then exposed one film before packing my gear to move onward.

The film was scanned at my usual resolution of 5,000 ppi and 16-bit pixel depth to obtain a black & white digital image of nearly one GB in size. The digital image that was obtained from the scanner is shown below:

It is obvious that film exposure at the scene was not good since the film was overexposed and lacked sufficient contrast. I normally shoot Tri-X film and an error like this seldom occurs. For this photo, however, I was experimenting with TMax-100 film and hadn’t done enough testing to understand the film as well as I should have. Fortunately, film is very forgiving and the image could be easily fixed by digital editing.

A Levels Adjustment Layer was opened in PhotoShop and the black and white sliders were moved various amounts to explore the image. I ultimately decided to move the black slider from 0 (pure black) to 30 and the white slider from 255 (pure white) to 243. This darkened dark image tones and brightened bright tones to increase image contrast. The image below shows the result of Levels adjustment.

When this image is compared to the image before Levels adjustment one can see that both shadowed and sunlit areas were strengthened by the adjustment. In particular, sunlit areas of the image feel brighter, especially on the tree trunk. However, many oak trees were separated poorly and needed to look more distinctive.

A Curve Adjustment Layer was opened to strengthen darker tones in the image. A section of the curve was bent upward to reduce the brightness of selected dark tones without altering other image tones.

The result of curve adjustment is shown in the following image. 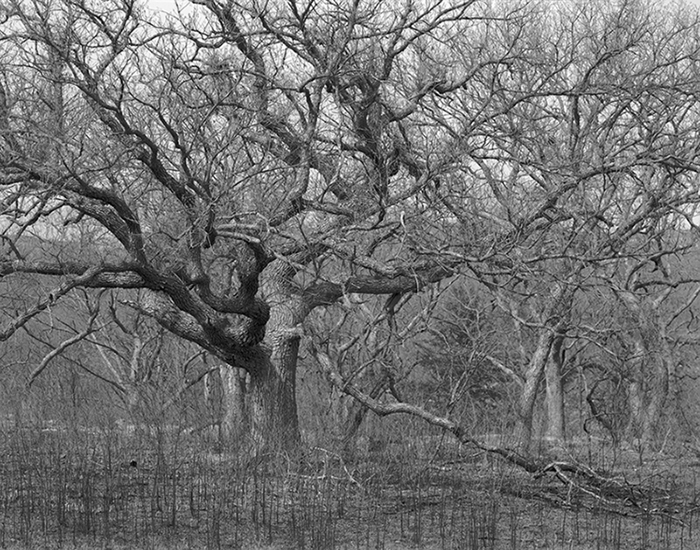 When this image is compared to the previous image, you can see that mid-range dark tones were intensified but darker and brighter tones were not strengthened.

The most important shadow that benefited from curve adjustment was the large one that spans a big area of the trunk on the nearest tree. The curve adjustment helped define that shadow considerably. This may not be appreciated by viewing the tiny web image shown here but the affect of curve adjustment is clearly visible in higher resolution images that possess more detail.

Curve adjustment also helped define the bare stalks of brush in the foreground although this too may not be easily visible in the tiny image shown here. The web is not such a good place to view most photographs. A 300 KB web image simply can’t communicate what can be seen in a large print made from a 1 GB file.

The first areas to be retouched were dark spots that resulted from ash particles on the film during exposure. I photographed in fires and freshly burned areas for several days and a substantial amount of ash landed inside my camera. Small ash particles entered my camera when lenses were changed or the camera back was opened to insert a film holder.

Ash contaminated many films, including the one discussed today. For example, the large black spot on the ground to the left of the near tree resulted from an ash particle on the film during exposure. Several other black spots can be seen higher in the tree and spots that were distracting were removed by retouching.

The next thing to receive retouching was a dark, jagged branch from a tree located outside the viewing area. The branch can be seen at the right edge of the image where it extends to the curved tree trunks a short distance from the edge. This branch is especially distracting since it draws attention from wonderfully curved trees that help turn the viewer’s eye back into the image.

Finally, I burned the bottom two corners of the image to help push viewer’s eyes toward the trees rather than letting their eyes fall off the image. The top right corner also was burned a smidgen to help keep viewer’s eyes on the image.

The image below shows the result of local retouching. Retouching actions can be seen best by comparing the retouched image to the previous image. 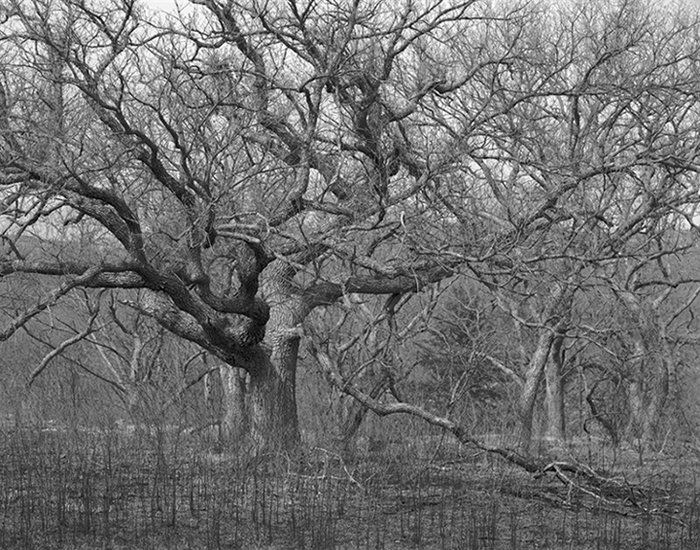 This photograph prints nicely and looks best in large sizes where important visual information is evident that cannot be seen here.

I suspect that this is one of those images that will receive many steps of additional editing in the future as I discover ways to improve it. Complicated images tend to do that. Writing this blog revealed at least one important edit that I will make to strengthen the image further!

The overall goal of my photo trip to Kansas was to capture some of the natural beauty that is so abundant in the Flint Hills. I hope that beauty is evident in this photograph. For a slightly better view of this photo, visit here. To see other photographs of the Kansas prairie, visit the Kansas gallery on my website.