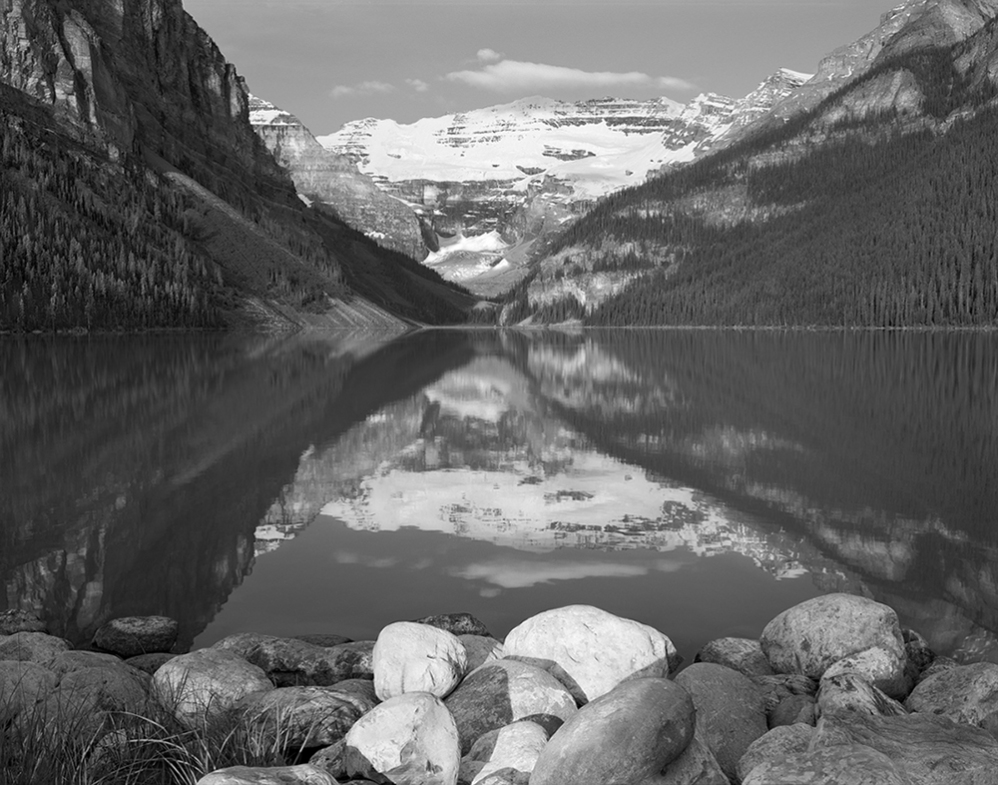 Lake Louise is a popular destination for visitors to Banff National Park in Alberta, Canada. The lake is located close to the town of Banff and is easily accessible by paved roads. A large parking area that is situated close to the lake provides convenient access to the water.

The scene is ‘picture postcard’ beautiful. Rugged mountains flank the lake and Victoria Glacier can be seen at its far end (far center in this photo).

I arrived at Lake Louise shortly after sunrise and was welcomed by morning sunlight penetrating the scene. The visual interplay between bright snow on the far side of the lake and sunlit rocks on the near shoreline caught my attention immediately.

Including shoreline rocks in the composition helps the photograph communicate the scene’s depth. Centering the rocks in the composition guides viewer’s eyes strongly into two “V” shapes produced by the mountains and their reflections. Developing strong eye movement between the near rocks and mountains on the far side of the lake is an effective way to help communicate depth in this photograph.

Light changes rapidly near sunrise so I positioned my 4×5 view camera on the shoreline quickly. Fortunately, it was necessary to walk only a few steps from my parked car.

I used the two bubble levels attached to the back of my camera to quickly align the film plane to the horizontal level and vertical plumb. Then, I tilted the lens forward so its focal plane included both the foreground rocks and mountains on the far side of the lake. Tilting a lens so its focal plane includes key components of a scene places valuable depth-of-field where it is needed most. This allows the photographer to use larger f-stops and thus faster shutter speeds, if desired.

Shutter speed was important for today’s photograph because the lake’s surface exhibited movement that would blur reflections if the shutter speed was too slow. Try to visualize the image shown above but with reflections that are blurred considerably and you are likely to conclude that the photograph would be weakened considerably. For example, the sense of image depth would be much weaker since viewer’s eyes would not be guided to the far side of the lake by the “V” shape of mountains reflected on the lake.

One of my goals for today’s photograph was to communicate the clean and pure character of the scene so I used a medium yellow filter during exposure to reduce the effects of atmospheric haze on my black & white film. The yellow filter also helped separate clouds and snow from the clear blue sky by darkening the blue sky a bit.

A few light meter readings were acquired through the yellow filter. Shadowed trees on the left were placed on Zones II-III (very dark with little detail – dark with good detail). This caused sunlit trees and shaded rocks on the near shore to fall on Zones IV-V (slightly darker than middle gray – middle gray). The clear sky and sunlit rocks on the near shore fell on Zones VI-VII (slightly brighter than middle gray – bright with good detail). Sunlit snow fell on Zone VIII (very bright with little detail).

These tonal values were consistent with my impression of the scene so I specified Normal (N) development for the film.

The light meter offered numerous f-stop and shutter speed combinations and I selected a shutter speed of 1/15 sec since I thought it was fast enough to minimize water movement enough during exposure to capture well-defined reflections from the lake. The shutter speed required an f-stop that was half way between f/22 and f/32. This f-stop was small enough to provide adequate depth-of-field for the scene since lens tilt positioned the lens’ plane of focus on both the near rocks and the far mountains.

I exposed one film and departed to search for another photograph.

The 4inch x 5inch black & white film was scanned at my usual resolution of 5,000 ppi and 16-bit pixel depth to obtain a black & white digital image of nearly one GB in size. The scanned image is shown below without any editing.

The gray-level histogram for the scanned film looked good. A small amount of pure black existed in deep recesses between rocks on the near shoreline. No pure white was present in the image but the brightest pixels were located on sunlit snow of the far mountains and were plenty bright (gray level = 250).

My first impression was that shadowed areas looked too heavy for a clean, bright mountain scene. Consequently, the first edit I made was to establish better balance between shadowed areas and other parts of the image. A Curve Adjustment Layer was opened and named “Global Curve.” Only one section of the curve was changed.

Dark (but not black) pixels were brightened by bending the linear curve upward for pixels with gray levels darker than 100. This adjustment added luminosity to shadows and increased the presence of sunlight in the photograph. The result of the curve adjustment is shown below.

Next, local retouching was performed using PhotoShop’s Burn, Dodge and Healing tools. The original image layer (image from the scanner) was duplicated and named “Retouch.” Numerous edits were performed in the Retouch Layer to darken, lighten or repair areas of the image.

The presence of sunlight was strong at the scene so editing was performed to emphasize it in the image. In particular, the sun rising on the left dominated the character of light at the scene so light from the rising sun was strengthened. The Dodge tool was used to brighten sunlit trees on the left, sunlit rock on the mountain sides, sunlit snow and sunlit rocks on the near shoreline. Since Victoria Glacier played a key role in the formation of Lake Louise, part of the glacier was brightened to draw an appropriate amount of visual attention to it.

Several small areas of visual distraction along the bottom edge of the image were dodged and burned to reduce their visual weight.

The image below shows the effects of local retouching. 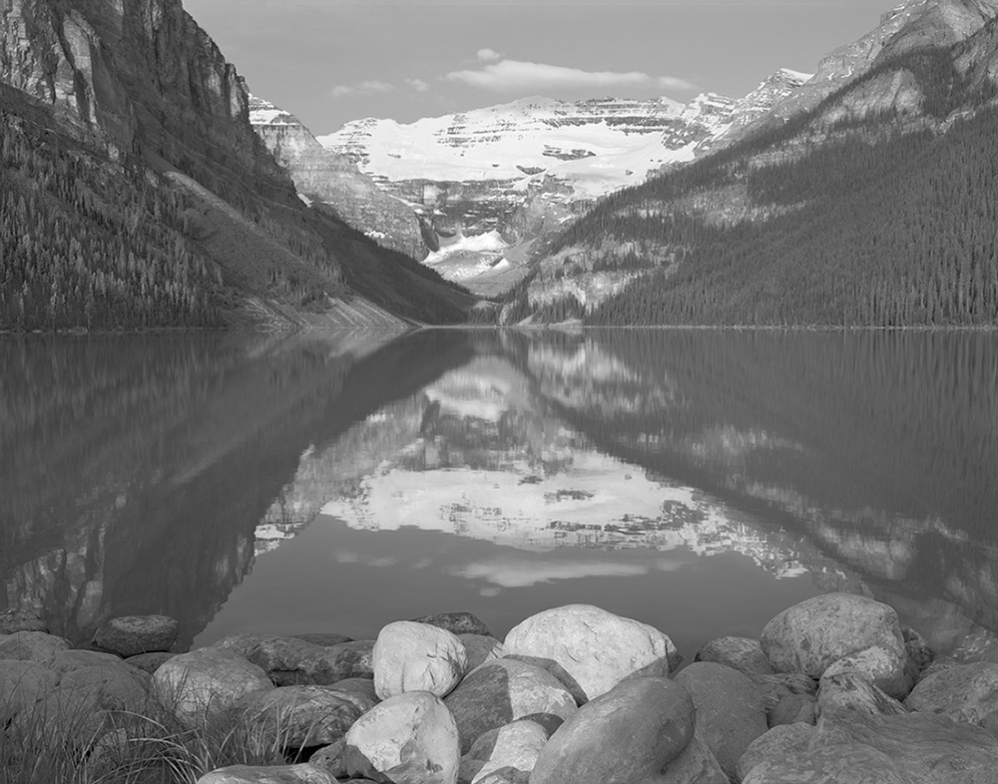 I made a test print and discovered that the foreground rocks required substantial strengthening to provide balance with the sunlit glacier at the far side of the lake. PhotoShop’s Magnetic Lasso tool was used to select the foreground and a Brightness/Contrast adjustment layer was opened for the selection. Brightness was increased from 0 to 32 and Contrast was increased from 0 to 27.

This enhanced the feeling of sunlight in the image and emphasized the sun’s location on the left of the scene. This image below shows the result of the foreground adjustment. 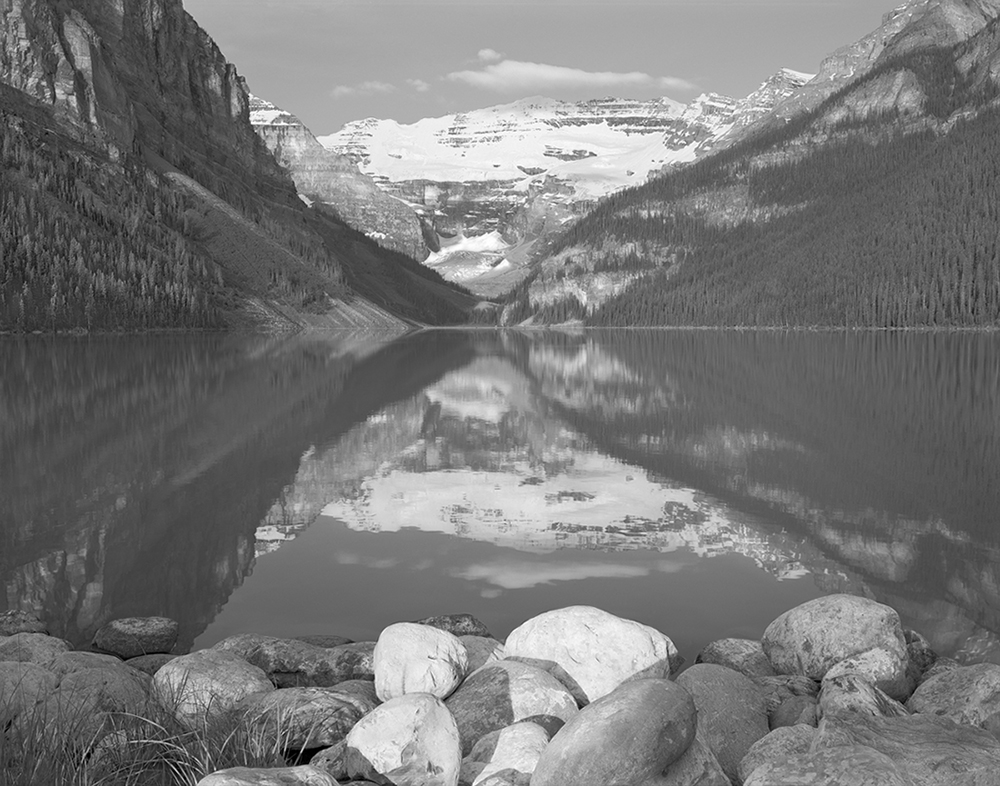 I believe the photograph does a good job of showing beautiful Lake Louise in early morning light. Prints of this photo look best at larger sizes where many details from the scene are visible. The strong presence of early morning sunlight in the photograph produces better prints when they are given a subtle warm tone.

I believe this photograph does justice to a ‘picture perfect’ scene in the Rocky Mountains of Canada. Any comments you might have about the image, the photographic approach used for it, the image composition or its workup will be appreciated.

For a slightly better view of this photograph, visit here. To see other photographs from the Canadian Rocky Mountains, visit the gallery “Western Canada” at my website.