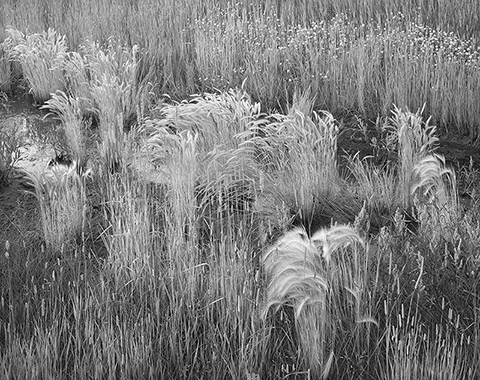 I recently retrieved the film for this image from my files and worked it up into a nice print. The film was exposed a few years before I began systematically recording pertinent exposure information so I recall scarcely any facts about the photograph. However, I am fairly certain the film was exposed during the late 1970’s because of a few interesting details that I remember about the scene.

I started Ph.D. school in 1976 and purchased an old $200 convertible for transportation between my home in Illinois and school in Florida. The convertible turned out to be the best automobile I’ve ever purchased since I drove it for ten years and traveled across the country numerous times.

I owned a 4inch x 5inch view camera at the time and made a 1-2 week photography road trip each year as a break from school. I had to scrimp to purchase a 100-sheet box of film and darkroom chemicals for each trip so spending money on motel rooms was simply out of the question. My “lodging” solution during road trips was simply to curl up on the back seat of my convertible. Locating a relatively safe area to park my car each night required a little thought but I learned to look for two quiet places that were present nearly everywhere – cemeteries and garbage dumps. In those days, neither was locked at night and people seldom entered them after dark. After locating a suitable cemetery or dump, I parked in an out-of-the-way spot before crawling onto the back seat to sleep. I always tried to awaken well before sunrise so I could depart before visitors or workmen arrived. During those years, I probably slept more than 100 nights in cemeteries and garbage dumps and I never encountered a problem.

I came close on one occasion, however. I was sleeping in a municipal garbage dump and woke to the sound of a bulldozer. I had overslept and the sun found me still asleep in my car. Fortunately, the dozer operator did not see my car because I had parked in an area far removed from the current work area. I feared getting in trouble if I didn’t exit quickly, however, so I jumped into the front seat, put the key in the ignition and shifted into drive to make a quick escape.

As I began to step on the gas pedal, I looked out the driver’s window and saw beautiful grass growing in a low, wet area next to the car. I paused for a moment before deciding that I had to make a photograph. I hurriedly set up my camera, took a couple of readings with my light meter and exposed a negative. With the camera still remaining on its tripod, I placed it in the car trunk and sped away as fast as I could. I departed in such haste that I remember few details about the scene. I don’t even recall where the municipal garbage dump was located.

I was so hurried to record the film that I didn’t think much about the photo’s composition. I’m glad the film included the standing water at the scene. I think the water is necessary to avoid visual monotony since the only other scene element is vegetation. To appreciate this, place a finger over the stagnant water in the photograph and you probably will notice that the image commands less attention.

On a personal level, the stagnant water is a reminder of the days when I ventured on photography trips with barely enough money to get back home. I chuckle when I recall spending a particular night at a low, wet, out-of-the-way spot in the municipal garbage dump to record the photograph discussed here. Ah, the adventures that life sometimes offers! I acquired many fine photos during those road trips and believe the images prove that producing good work doesn’t require as much as people may think.

I previewed the film on my drum scanner and the image looked slightly flat. I instructed the scanner to increase image contrast before recording a digital file at my usual resolution of 5,000 dpi and 16-bit pixel depth. Viewing the scanned image with PhotoShop showed that it still looked a bit flat so my first PhotoShop edit was to perform a levels adjustment to increase contrast.

I followed the levels adjustment with a curve adjustment to nudge tones to values that offered more delight to the eyes. This step was crucial to obtain a print that contained “delicious” tones. Those tones do not appear well in the small web image shown above but are important to the appeal of a print.

I performed quite a few local edits to strengthen the image. First, I dodged (brightened) numerous clumps of grass to enhance visual movement from the foreground to the background of the image. While doing that, I noticed that brightening grass clumps had the added affect of causing my eyes to pump in and out of the image. That is, areas of bright grass seemed to add sky-to-ground depth as well as foreground-to-background depth. That was a nice surprise.

Next, I edited the image in a way that many people would consider to be too tedious to justify. I thought that plants located on the far side of the water near the upper right edge of the photograph did not contribute enough to the image. The most obvious remedy was to brighten the flowered tops of those plants so I enlarged the image substantially on my computer monitor and carefully dodged each small flower. That added more life to the image as anticipated but I was surprised to see that it also substantially altered the way my eyes moved through the image.

Paying attention to small details sometimes has big consequences and dodging the tiny flower tops produced a huge improvement in visual movement for this image.

While traveling with a budget that was too small to include money for lodging, a beautiful scene was photographed in a municipal garbage dump. I believe the photo shows once again that beauty can be found just about anywhere and it is up to the artist to see it.

A 4inch x 5inch film captured an enormous amount of scene detail and a large print looks crisp and real. As usual, the tiny image displayed here on the web communicates little of the image’s content or emotion and most viewers will likely enjoy an actual print considerably more.

Any comments you might have on this image, the photographic approach used for it, the image composition or the workup of the film will be appreciated. For a slightly better view of this photograph, visit here.

One thought on “Grass In A Garbage Dump”